TransLink hopes to operate its fleet using renewable energy by 2050 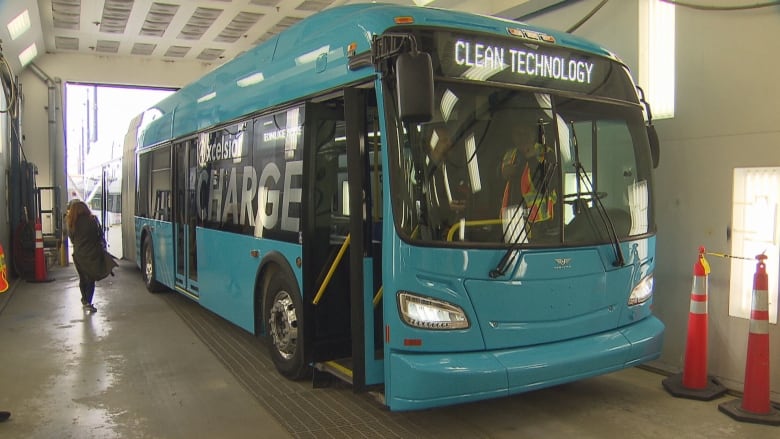 TransLink’s first battery-electric buses are taking to the roads in Metro Vancouver as part of a pilot project to reduce emissions.

The first four zero-emission buses picked up commuters in Vancouver, Burnaby and  New Westminster on Wednesday. Six more are expected to be brought in.

“With so many people taking transit in Vancouver today, electric buses will make a real difference,” said Merran Smith, executive director of Clean Energy Canada, a think tank at Simon Fraser University, in a release.

According to TransLink, each bus is expected to reduce 100 tonnes of greenhouse gas emissions and save $40,000 in fuel costs per year compared to a conventional diesel bus.

“Buses already help tackle climate change by getting people out of cars, and Vancouver is ahead of the game with its electric trolleys,” Smith said.

She added there is still more work to be done to get every bus off diesel.

The buses will run along the No. 100 route connecting Vancouver and New Westminster. They recharge — it takes about five minutes — at new charging stations installed at both ends of the route while passengers load and unload or while the driver has a short break.

Right now, more than half of TransLink’s fleet currently operates with clean technology.

“Our iconic trolley buses have been running on electricity since 1948 and we’re proud to integrate the first battery-electric buses to our fleet,” said TransLink CEO Kevin Desmond in a press release.

TransLink has made it a goal to operate its fleet with 100 per cent renewable energy in all operations by 2050. Desmond says, the new buses are one step closer to meeting that goal.

The new battery-electric buses are part of a two-and-a-half year pilot project that looks at the performance, maintenance, and customer experience of making the switch to electric.