We took a test ride on one of the new ORBT buses. Here’s what it was like. 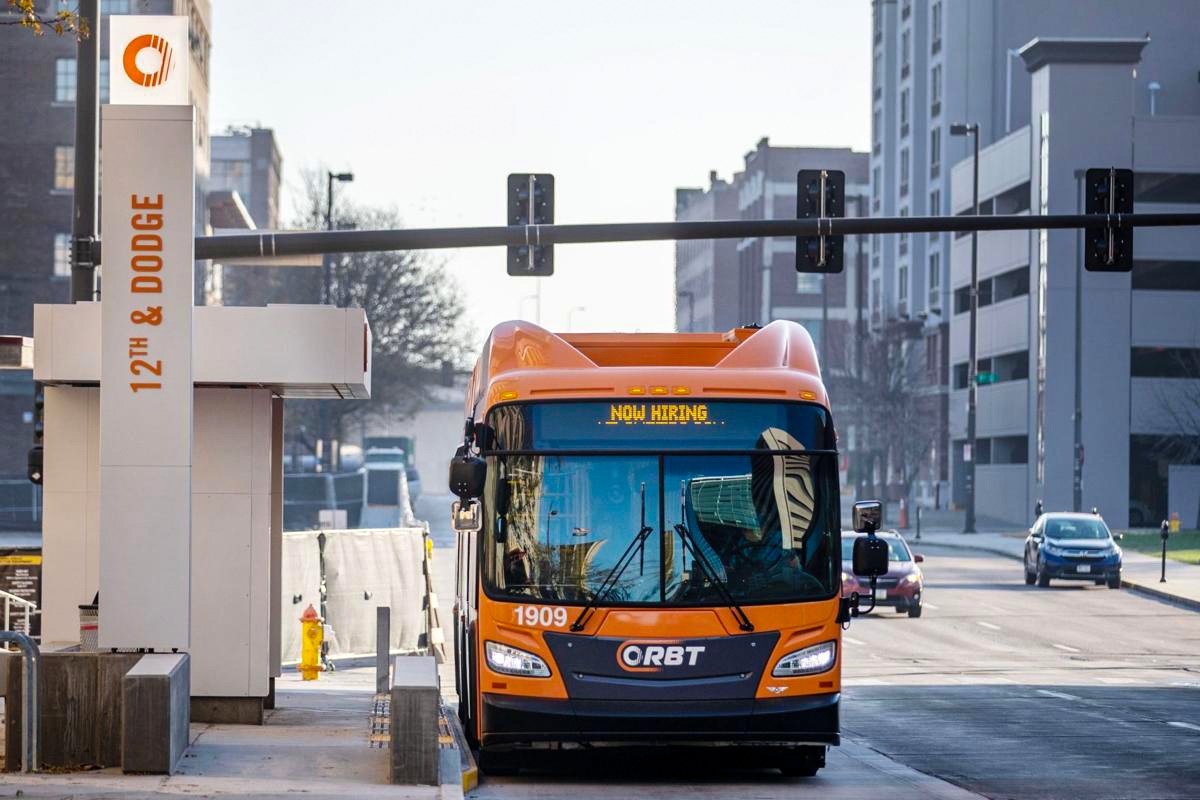 Starting Wednesday, Omaha’s new rapid transit bus line will be running up and down Dodge and Douglas Streets.

Tuesday, members of the news media got to ride on the new buses:

Riders board the 60-foot-long buses, easy to spot by their bright orange color, through any of the three doors.

The raised bus platforms let riders walk straight onto the buses, without having to step up or down.

Riders toting bikes can wheel them into the bus and hang them on racks inside rather than hanging them from a rack on the front of Metro transit’s traditional buses.

Inside the bus, riders can choose forward-facing seats or ones that face the aisle. The seats, lightly cushioned and covered in a blue patterned fabric, make for a fairly comfy ride. The ride is relatively quiet, too.

The total project cost $37 million. The ORBT route runs from downtown Omaha to Westroads Mall, with 27 stops along the way. An ORBT bus will arrive at a platform every 10 minutes between 7 a.m. and 7 p.m. on weekdays.

Along the downtown loop, east of 30th Street on Dodge and Douglas Streets, ORBT buses have a dedicated transit lane. ORBT buses also have some traffic signal control.

Reporters, city officials and some Central High School students took two laps around downtown Tuesday, starting at the station near 20th and Dodge Streets and looping down to 10th Street.

The buses have an accordion hinge in the middle that flexes as the bus turns corners.

Among the more notable features are screens near the doors that show riders an overview of the route as well as the next street and stop they’re approaching. The screens also display the time, date and weather. Each bus also is equipped with Wi-Fi.

Other signage, which hangs along the roof in the center aisle, displays a message when a stop has been requested along the route.

Tuesday was the first time Omaha Mayor Jean Stothert had ridden one of the ORBT buses. The bus, she said, felt clean and modern.

“It was a very smooth, very quiet ride,” Stothert said.

Officials with Metro transit say the new system is designed to enhance the rider experience and make things easy for first-time riders.

Bus fare for ORBT is free for the first four months. Once the grace period is up, ticket vending machines will be placed at the bus stops.