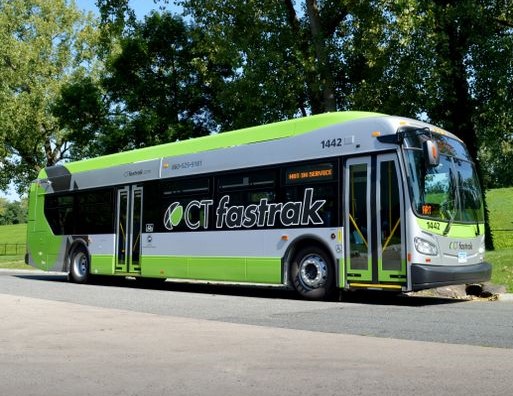 The Connecticut Department of Transportation (CTDOT) is planning to introduce the first automated heavy-duty buses in revenue service in North America, with the project set to go live in approximately a year. The project includes the deployment of three battery-electric 40-foot New Flyer Xcelsior CHARGE™ vehicles. CTDOT is scheduled to take delivery of the first vehicle in December 2020.

The automated buses will operate on the CTfastrak bus rapid transit (BRT) guideway — a 9.4-mile dedicated BRT route connecting downtown Hartford and downtown New Britain. The guideway was built on current and former railroad rights-of-way owned by the State of Connecticut and Amtrak, allowing for the minimal taking of private land. From Downtown New Britain Station to Newington Junction, the busway follows the former Newington Secondary rail line. From the Newington Junction Station to Downtown Hartford, the busway operates side-by-side with the Hartford Line rail service on Amtrak’s New Haven-Springfield Line. Another guideway feature is a five-mile multi-use trail, 10-feet wide and separated with a fence, for pedestrians and cyclists to access stations and use for recreational purposes.

Along much of its length, the guideway is constructed as a grade-separated limited-access highway. There are five at-grade crossings of local roads — three in New Britain, one in the Elmwood section of West Hartford, and one in Hartford.

Because of the way the infrastructure is set in place on CTfastrak, CTDOT’s Transit Administrator Dennis Solensky says it is an opportune place to test several technologies including automated buses.

“Because we manage the guideway, the signalization, and the buses themselves, it makes the CTfastrak a nice, safe environment to introduce and test this type of equipment,” Solensky explains. “We would like CTfastrak to become the premier testing ground for this type of equipment, as well as other technologies in the U.S., because it is essentially a controlled environment.”

The pilot program consists of several partners, including CTDOT, New Flyer, and Robotic Research Inc., which is supplying, configuring, and supporting the automated driving systems that will be integrated into the New Flyer buses. Also on board are the Center for Transportation and Environment (CTE), who is acting as the project manager and technical consultant for the program, as well as the University of Connecticut and the Capital Region Council of Governments.

“From the manufacturer supplying the buses, to our folks who are managing the project and collecting data and the internal team we have here who are set to ensure the safety of the vehicles, we have assembled a tremendous team for this project. It’s this team that is allowing us to move forward confidently,” says Solensky.

The project began in earnest a few years ago, Solensky explains, just as he was coming on board at CTDOT.

“We started interviewing all the bus manufacturers to gauge their interest in developing automated technology. We also brought those folks in for tours, as well as folks who did autonomous pilot projects in the past and reached out to everyone we could at conferences and by telephone,” says Solensky. “Eventually, we submitted a grant proposal in partnership with New Flyer, who had in turn developed a partnership with Robotic Research.”

The pilot program is focused on successful demonstration of the use of automated technology on buses on public roads, the collection of relevant data to guide future policymaking, and the advancement of Advanced Driving Assist System (ADAS) technology for enhanced safety. The buses will demonstrate Society of Automotive Engineers (SAE) J3016 Level 4 technology.

“To this point, many of the autonomous pilots that have taken place in transit have focused on shuttles all settled on private property in many instances,” explains David Warren, director, sustainable transportation, at New Flyer. “What we’re doing with this project is ambitious, because we are demonstrating SAE Level 4 automation on a heavy-duty transit bus, which has hardly been demonstrated in passenger vehicles, let alone a heavy-duty bus.”

Solensky adds that the automated buses will operate with an on-board safety attendant at the operator’s controls to ensure passenger safety during the pilot program.“The fact that there will be a driver onboard that is able to take over at all times is a key piece of information that we want to communicate to the public,” Solensky says. “The bus will function autonomously at times, but there will be a driver there in case any interventions need to be made.”

New Flyer will integrate the Robotic Research LLC’s proprietary AutoDrive® automated driving technology into the new buses. The buses will operate through a technology called Lidar, which measures distances and determines through wavelengths of light what the digital representation of the object is that is sensed. Lidar uses light waves, while radar uses soundwaves.

“I wouldn’t say the process of integrating the kits onto our buses has been easy, but because we have had an existing partnership and Robotic Research has a history of developing this technology in other industries, including for the military, we didn’t have to reinvent the wheel, so to speak, for their technology to fit well with ours,” says Warren about the process.

New Flyer will also supply the charging infrastructure for the battery-electric buses through its New Flyer Infrastructure Solutions brand.Funding for the project is in part through the Federal Transit Administration’s (FTA) Integrated Mobility Innovation (IMI) program, and the Low or No Emission Bus Program. The IMI program funds projects that demonstrate innovative and effective practices, partnerships, and emerging technologies to enhance public transportation effectiveness, increase efficiency, expand quality, promote safety, and improve the traveler experience.