ADAS have advanced over the years from detecting vehicles and pedestrians to serving as the foundation for more robust automated driving technologies that enhance the safety and efficiency of public and private transportation. 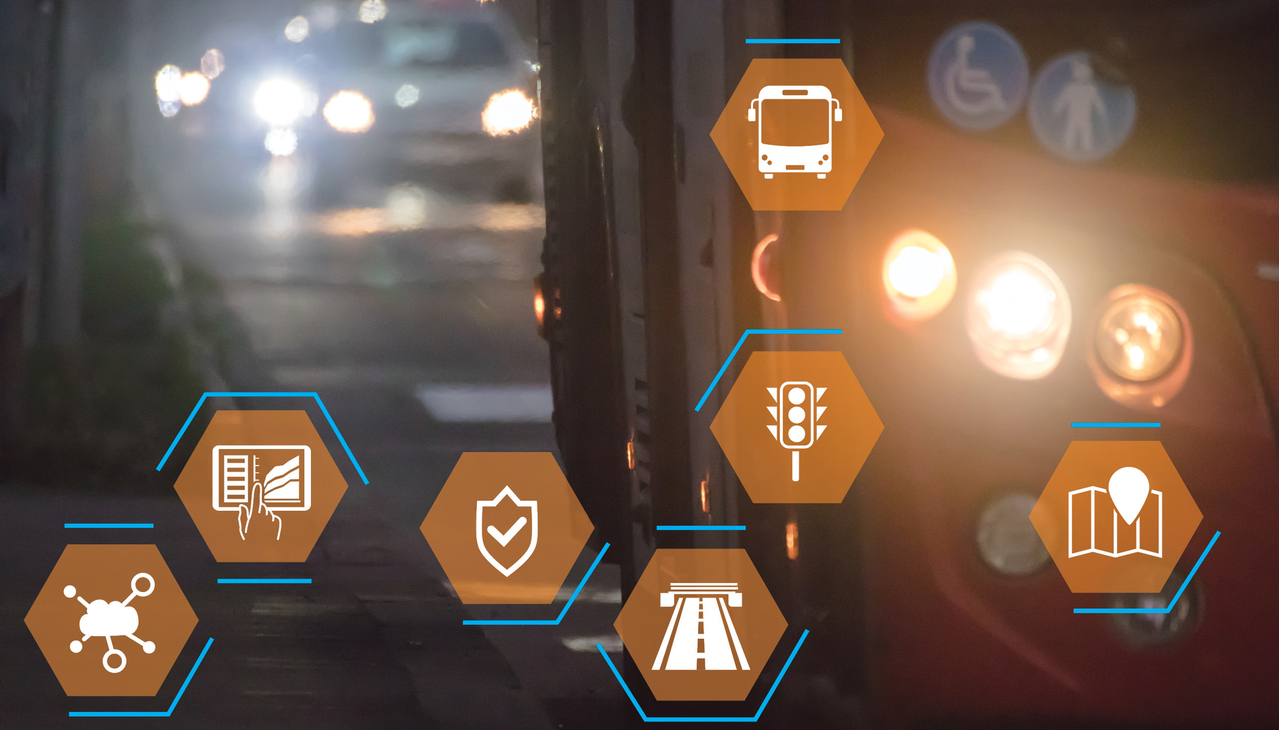 ADAS are electronic systems designed to assist the driver in the process of operating a vehicle, which improves passenger, vehicle and general road safety. These systems utilize cameras, radars and other sensors to execute a variety of functions ranging from detecting objects in blind spots and hazardous road conditions, to providing lane keeping assistance and advanced braking systems. Options for ADAS include assist systems and support of semi-automated functions.

“A system that takes control of the vehicle is referred to as an automated system or function, and one that supports the driver in taking the right action is a driver assist system,” explained John Wilkerson, senior communications manager for corporate communications, ZF North America (ZF).

For instance, the Mobileye Shield+ ADAS supplied by Rosco Collision Avoidance, Inc., (Rosco) doesn’t take control from the driver; instead, the operator takes the necessary steps related to the alert. Mobileye’s Shield+ uses a camera-based system to provide forward and side sensing to alert the driver to potential collisions with vehicles and vulnerable road users (VRUs) such as pedestrians and bicyclists. It also alerts the driver with audio and visual notifications of an impending collision, explains Mike Cacic, program manager of collision avoidance systems, Rosco. Other features include, headway monitoring and warning, lane departure warning and speed limit indication, to name a few.

“The primary communication with the operator is to achieve safe maneuvering of the vehicle and to safely navigate busy urban environments through the operator’s awareness of potential vehicle and VRU threats in the path of the moving bus,” said Cacic.

ZF produces a variety of ADAS systems which can perform active functions where the system itself can take the necessary actions to mitigate an imminent risk, such as automatic emergency braking that stops the vehicle if the driver is not responding to alerts. Other vehicle motion control systems that can be integrated with ZF’s ADAS functions include electric steering, which offer lane keeping when combined with a camera, and advanced braking systems, explains Dan Williams, director, ADAS and autonomy, ZF Commercial Vehicle Division.

“ZF systems operate similar to the human principles of see, think and act,” Williams said. “They utilize sensors such as cameras and radars to ‘see’ the environment, [and use] central processing units that ‘think’ by processing the information from the sensors and deciding what actions might need to be taken.”

New Flyer is also testing the possibilities of ADAS, however its approach to implementing the technology is a bit different. In May 2019, the company started a partnership with Robotic Research to develop a Society of Automotive Engineers (SAE) Level 4 AV bus as a way for New Flyer to build confidence in the technology, says Kirk Burcar, vice president, engineering services, New Flyer. According to SAE International, an SAE Level 4 vehicle performs all driving tasks autonomously while it monitors the environment.

“We strongly believe [ADAS] should not be simply bolted on to any existing bus,” Burcar said. “As such, we have gone to great efforts to fully integrate Robotic Research technology into the electrical architecture of the New Flyer bus. The ‘brains’ of the system are located on the bus and connected to the cloud.”

Information from the sensors is relayed to the ADAS controller that interprets the signals and processes the information through automated driving system algorithms, which determine the vehicle’s trajectory and speed based on an intended predetermined path, Burcar explains.

Regardless of the functions performed by ADAS, the systems serve as building blocks for future automated solutions.

Evolutions in ADAS Serve as the Foundation for Automated Driving Technologies

For Rosco, Cacic says advancements in the processing power and artificial intelligence of the microprocessors within Mobileye Shield+ has improved image recognition and low-light detection, creating continuous detection of vehicles and VRUs regardless of the time of day. And in addition to better object detection, the artificial intelligence can provide warnings to pedestrians via external speakers and lights, which are powered by the Mobileye Shield+ onboard the vehicle.

New Flyer has also benefited from increased computing power and processing speeds to allow the vehicle’s controllers to process more information and respond faster. This is because large amounts of data can be transmitted from the vehicle to or from its surroundings thanks to telematics and cellular signal processing, explains Burcar, who says further advancements in this technology and information connectivity will help buses better navigate congested routes.

“If connected, the vehicle does not have to drive itself all alone,” Burcar said. “It is best if it connects to both infrastructure and other vehicles to make the best decisions of how to maneuver safely through traffic. That connectivity gives the vehicle a better picture of its surroundings and helps to anticipate problems, even with traffic flow.”

But before vehicles can achieve true connectivity with one another and their environment, Burcar shares it is prudent to start improving SAE Level 1 and 2 technologies: think basic functions like lane centering and/or adaptive cruise control. Once these basic applications are understood, the information can be applied to the next wave of more advanced ADAS technology.

“A whole sensor suite could be installed on a bus including the ADAS controller but still operate at SAE Level 1-2,” Burcar said. “However, all the data of how the driver controlled the bus in various situations could be compared to how the ADAS controller would have controlled the bus to measure the anticipated performance of the ADAS system. This knowledge can then be applied to later ADAS development projects involving SAE Level 3-4.”

And finally, improvements in sensor technology have allowed ZF to improve its advanced braking system from being able to identify objects at the vehicle level to being able to identify VRUs and independently braking when necessary. For example, external camera technologies used on city and school buses can better sense pedestrians and warn drivers of potential collisions.

“The advancements we’re talking about today in systems’ capabilities can definitely assist with the safety and efficiency of the mass transit system through increased penetration of vehicles using ADAS and with connectivity with the infrastructure and other vehicles to further advance Intelligent Transportation Systems,” Williams said.

Getting to a Higher Level of Automation

“We are most likely to see autonomous vehicles first in less complicated scenarios such as commercial vehicles on highways,” Williams said. “In cities, it will begin with vehicles like autonomous shuttles on defined routes at lower speeds.”

“The latest Mobileye Shield+ vision-based sensors and the associated artificial intelligence are becoming more capable to recognize and manage these challenging scenarios, but more work still needs to be done to safely implement automation,” Englander said.

While concerns of operating in complex environments are valid, Burcar adds other challenges to implementing further automation include regulations, industry standards and public acceptance of the technology.

“We are actively supporting and responding to inquiries from the [U.S. Department of Transportation], [Federal Transit Administration], [National Highway Traffic Safety Administration] and others to help lay the groundwork required for policy and regulation to be put in place,” Burcar said.

Despite these roadblocks one thing is certain: ADAS technology will continue to evolve as companies work towards higher levels of automation.

“Advancements in road safety and in autonomy are not a matter of if we can afford them – the facts observed from global roads statistics show that we can’t afford not to pursue them,” Williams said.