Published by The Laval News 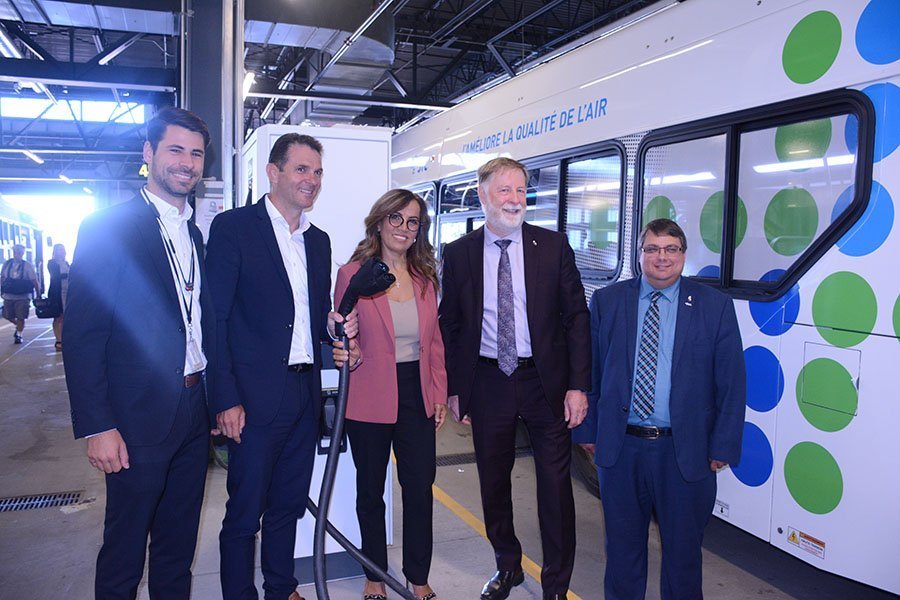 The Société de transport de Laval (STL) unveiled recently Québec’s first battery-electric city bus with a range of 250 km, which will be used for testing and validation ahead of the 2020 entry into service of the province’s first all-electric bus line. The unveiling event was attended by Eva Nassif, Member of Parliament for Vimy, representing the Honourable François-Philippe Champagne, federal Minister of Infrastructure and Communities; François Bonnardel, Québec Minister of Transport and Minister responsible for the Estrie Region; and Marc Demers, Mayor of Laval.

The 100% electric bus line will comprise 10 such vehicles, acquired as part of the largest contract for electric-bus production ever awarded in Québec. The STL initiated the project to procure 10 40-foot slow-charge electric buses in collaboration with the Association du transport urbain du Québec (ATUQ). The Société de transport de Montréal (STM) participated in the call for tenders with an order of 30 additional buses.

Besides reducing greenhouse gas (GHG) emissions by 70 to 80 tonnes a year, the electric bus will offer transit users a smoother and, especially, a quieter ride. It has a range of 250 km and will be charged overnight at the STL garage; this type of vehicle will therefore guarantee service flexibility for the transit authority. Canadian-based New Flyer Industries Canada ULC has received the contract to manufacture 10 battery-electric buses for the STL, for summer 2020 delivery.

Procurement of the buses is made possible thanks to $9.6 million in financial assistance from the governments of Canada and Québec, through the federal Gas Tax Fund (GTF) and the Programme d’aide aux immobilisations en transport en commun (public transit capital acquisitions assistance program) of the Société de financement des infrastructures locales du Québec (SOFIL), respectively. The Government of Canada is contributing $6.8 million, while the Government of Québec is extending $2.8 million in aid. 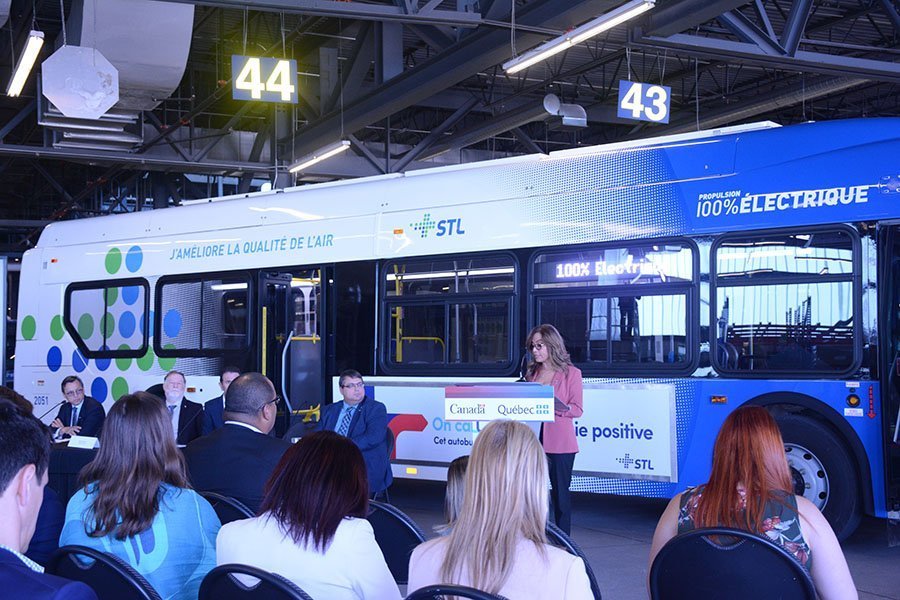 “I am delighted to be here today to mark the arrival of this first electric bus, which, along with the nine others to come, will help reduce greenhouse gas emissions while improving the overall experience of Laval transit users. Investing in public transit infrastructure is vital for building sustainable communities and supporting growth that benefits everyone. With the amounts available through the GTF, communities can count on stable, long-term sources of funding to plan and implement their local infrastructure projects.”
—Eva Nassif, MP for Vimy, representing the Honourable François-Philippe Champagne, Federal Minister of Infrastructure and Communities.

“The addition of this all-electric bus to the STL network perfectly embodies the essential shift in direction that we must make in Québec. I am therefore very pleased to be taking part in today’s inauguration, and I hope this initiative will have a ripple effect on other transit authorities in Québec.”
—François Bonnardel, Québec Minister of Transport and Minister responsible for the Estrie Region

“Thanks to the STL’s determination to pursue innovation, today we’re welcoming this first all-electric city bus, which will save 70 to 80 tonnes of GHG emissions every year. This public-transit vehicle of the future is great for the environment, first of all, and second, it will make for a more enjoyable user experience, since it’s quieter. Electric buses are clearly part of our future vision in Laval.”
—Marc Demers, Mayor of Laval

“A leader in electrification since 2012, the STL is today taking a major step toward the full conversion of its network by taking delivery of this new battery-electric bus. We are powered by positive energy and committed to reducing our GHG emissions by 45%, and these slow-charge vehicles will ensure that we meet that target. By 2024, purchases of gaspowered buses will be a thing of the past for the STL.”
—Éric Morasse, Chairman of the Board, STL