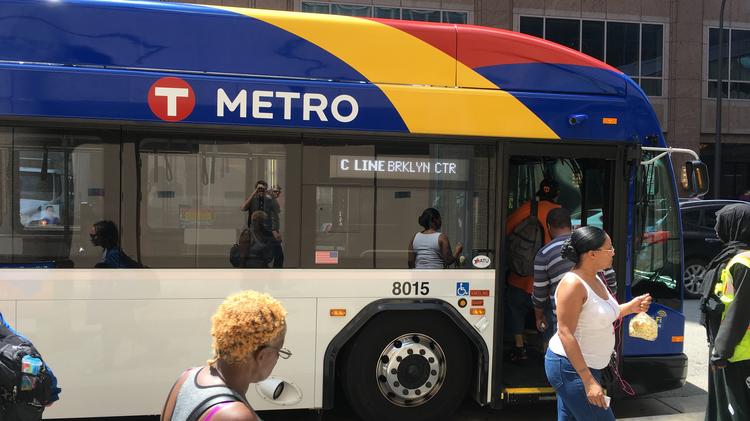 A C Line bus stops in downtown Minneapolis. Eight of the 14 buses dedicated to the bus rapid transit route are fully electric and run off a rechargeable battery.

The U.S. Department of Transportation announced $85 million in grants for low- or no-emission bus programs on Friday, including $2.5 million bound for the Twin Cities.

Metro Transit is the recipient of the grant, which will be used to support a small fleet of fully electric buses. Eight of the 14 buses operating on the C Line bus rapid transit route are all-electric models powered by rechargeable batteries, and the transit service is exploring options for adding more.

“This came as a nice surprise for us,” Metro Transit spokesperson Howie Padillasaid of the grant.

The DOT grant is earmarked for the design and construction of two new charging stations at a bus garage planned for a vacant lot north of Metro Transit’s North Loop headquarters building, Padilla said. The funds will also go toward a rooftop solar array and battery-storage system at the maintenance facility.

The garage is expected to go into service by 2022.

The all-electric C Line buses are 60-foot articulated Xcelsior models manufactured by St. Cloud-based New Flyer of America, Inc. They can travel up to 150 miles on a full charge.