TTC is investing millions on electric buses from three manufacturers to perform a head-to-head evaluation in order to better inform future procurements as it targets to have an emission free fleet by 2040. 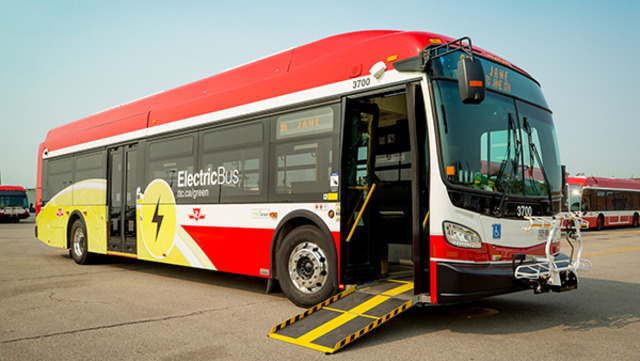 On June 3, TTC Chair Jaye Robinson and Toronto Mayor John Tory joined Marco Mendicino, Member of Parliament for Eglinton-Lawrence and Parliamentary Secretary to the Minister of Infrastructure and Communities to launch the first of the TTC’s all-electric buses into service on the 35 Jane route.

“Investing in urban public transit is essential to ensuring people can spend less time in traffic and more time with their families. The new zero-emission electric buses will provide reliable service for transit users on the 35 Jane route and reduce greenhouse gas emissions in the Jane and Finch community for years to come,” said Marco Mendicino, Parliamentary Secretary to the Honourable François-Philippe Champagne, Minister of Infrastructure and Communities.

The first bus, manufactured by New Flyer, arrived in Toronto in April and has since undergone testing and commissioning, as well as operator training. It is the first of 60 electric buses the TTC will have by the first quarter of 2020, making up one of the largest mini-fleets of electric buses in North America.

TTC explains that the electrification of vehicles is a key component of the Toronto’s TransformTO climate action strategy, which targets an 80 percent reduction in local greenhouse gas emissions by 2050. All vehicles in the city must transition to low-carbon energy by 2050 in order to meet the target. Currently, vehicles are responsible for generating about one-third of the emissions in Toronto.

“Our city is continuously looking at ways to reduce our carbon emissions, introducing electric buses to our robust fleet is one of the many ways we are advancing the TTC and demonstrating our leadership in becoming an environmentally friendly city,” said Mayor Tory.

The TTC’s new eBuses will be charged overnight with electricity generated by nuclear power and free of greenhouse gas emissions.

“This is an example of how we are modernizing our service, innovating for the long-term and planning for climate change. The TTC will continue to prioritize network-wide service improvements as we work towards a 100 percent zero emissions fleet by 2040,” said Robinson.

The government of Canada and the city of Toronto are investing C$140 million (US$104.26 million) in these electric buses as part of the federal Public Transit Infrastructure Fund (PTIF). TTC says this fund is helping keep Torontonians moving through investments in the repair, modernization and expansion of the city’s transit and active transportation networks. In total, up to C$1.8 billion (US$1.34 billion) is being invested in Toronto through PTIF, which was launched on August 23, 2016.

During long-term hydro power outages, or in the event of an emergency, there is potential for TTC electric buses to serve as mobile power plants. A bus with a 440,000-watt battery on board can be plugged into a building, such as an emergency response center or hospital, to provide electricity.