The transit agency wants all of its vehicles to be emission-free by 2040, and it took a step toward that goal on Monday.

Tory and TTC chair Jaye Robinson were aboard the eBus as it clocked into service along the 35 Jane route, in the city’s north end.

“The TTC is already an environmentally friendly way to travel the city, but today we are taking it one step further,” Robinson told reporters at the TTC’s Arrow Road Garage, where the electric buses will be charged.

The bus, built by Winnipeg-based New Flyer Industries Inc., is the first of an upcoming fleet of 60 to head into operation in Toronto by early 2020.

“Once these vehicles are delivered, the TTC will have one of the largest electric mini-fleets in all of North America,” she said.

The TTC board approved a joint $370-million plan with the federal government last November — $140 million of which is reserved to electrify Toronto’s buses. 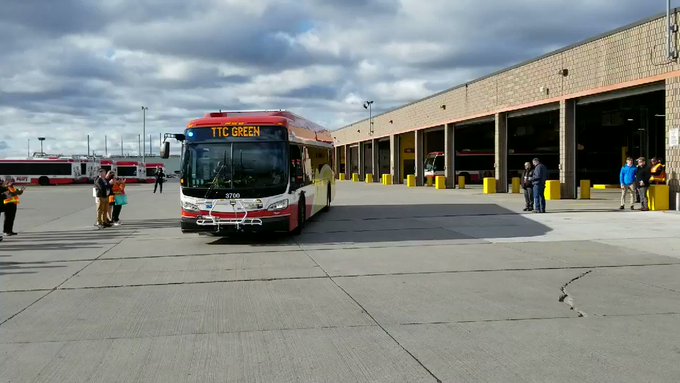 Each bus costs about $860,000 and will be initially rolled out on routes that are 75 kilometres or less.

During this period, the city will be testing eBuses manufactured by New Flyer Industries Inc. as well as those from Proterra Inc. and BYD Canada Co. Tory explained this will allow the TTC to determine which vehicle producer fits the needs of Toronto riders “that use them each and every day.”

The new vehicles will cut annual greenhouse gas emissions by 100 tonnes per bus, according to Eglinton-Lawrence MP Marco Mendicino.

“This will help protect our environment and improve air quality,” he said.