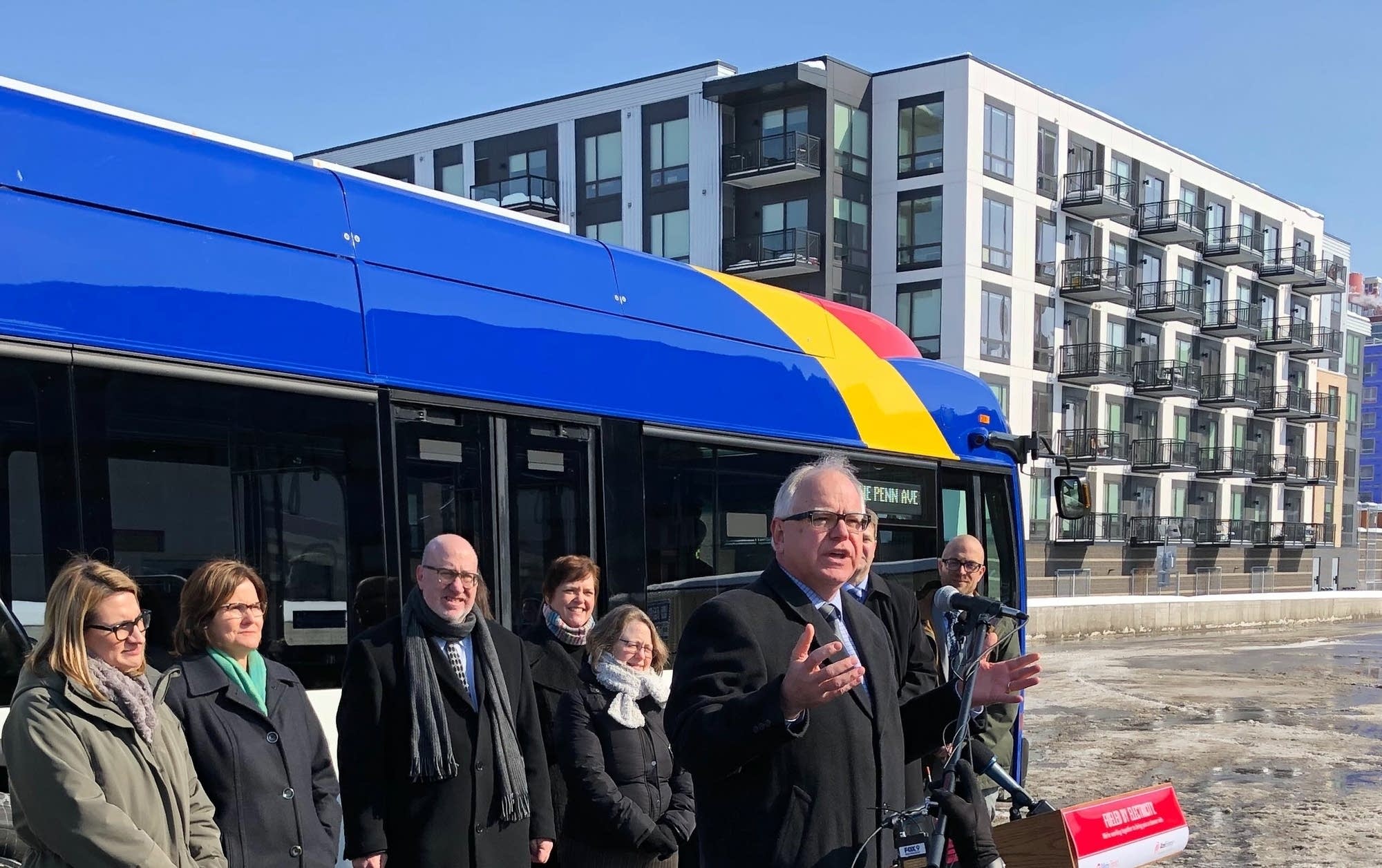 Gov. Tim Walz and officials attended the unveiling of Metro Transit’s first electric bus February in Minneapolis. The new bus rapid transit line will be served, in part, by a fleet of battery-powered vehicles made in St. Cloud. Jon Collins | MPR News

Metro Transit is preparing to launch its biggest road test yet for zero-tailpipe emission transit in Minnesota when the C Line rapid bus route opens Saturday.

The new service will link Brooklyn Center, north Minneapolis and downtown Minneapolis along an 8.5-mile corridor that runs mostly on Penn Avenue. The route offers faster service for passengers because the stops are not as frequent.

It’s the second of five planned bus rapid transit lines to operate in the metro area, and the first to use a mostly electric fleet. Eight of the 14 buses on the route will run entirely on electric batteries, replacing diesel and hybrid vehicles that carry passengers on other bus routes.

The C Line will be a good test of the reliability of electric buses, said Brian Funk, deputy chief of operations for buses at Metro Transit.

The agency has been monitoring the vehicles in a variety of simulated conditions leading up to the launch of the line, to evaluate how they perform.

“We’ve been doing testing for weeks with weighted sand bags to simulate a load on the bus, and stopping and starting, running high air conditioning, trying to simulate regular service,” said Funk. “The testing has been going great.”

New Flyer of America in St. Cloud builds the 60-foot articulated buses. They cost about $1.3 million, a 40 percent premium over diesel powered models. The electric propulsion vehicles offer a smoother, quieter ride according to David Warren, director of sustainable transportation, and could help build more demand for bus service.

“The overall economic payback on the electric propulsion will make a lot of sense for transit agencies like Metro Transit,” he said.

Electric buses have been around for more than 50 years — typically, though, they run on fixed routes and are powered by overhead wires, like electric trains. Metro Transit’s electric buses will be charged overnight in a bus garage. While in service, the buses will use a quick-connect charger at end of the route for charging up.

The C Line joins the A Line bus rapid transit route, which opened in 2016 and runs from Rosedale through St. Paul to the 46th Street light rail station in Minneapolis. The B Line bus route is being planned for the Lake Street and Marshall Avenue corridor. Another line, on Chicago and Fremont avenues, is scheduled to open as the D line in 2022, and a fifth bus rapid transit line, on Hennepin Avenue, is scheduled to follow in 2024.